There are so many funny nuances that you encounter when you’re growing up Greek in America, or in the case of my little one, Growing up Greek in Canada.  From before she was born hubby and I decided that it was important for our child to grow up Greek.  Now I know many people who have raised ‘Greek’ children and they can barely say ‘kahlihmehrra’. I’m not interested in that.  I want my child to say καλημέρα and know where the accent should even go.  The language, the customs, the traditions, this is what it means to be Greek. Celebrating your ονομαστική γιορτή (nameday), celebrating Greek Independence Day by going to the Danforth for the parade in her βασίλισσα αμαλία outfit, celebrating the Ἐπιτάφιο service on Good Friday and the Eσπερινός Αγάπης on Easter Sunday are all events I look forward to attending with the little Miss for years to come.  They wouldn’t be something we think twice about attending.

We’ve had a busy week. Miss K started two of her fall classes. I know if you’re Greek you’re sitting there saying she’s sending her kid to school now? She should have started a couple of months ago!  We are adding onto our nursery rhyme collection…if you remember I’m better with the Greek ones than the English ones. One class is primarily rhymes and reading so we should be able to add to our repertoire! We’re also excited to have our paternal γιαγιά and παππού back from Greece. Of course they spoiled the little one. We’re beyond loving our new Ζουζουνακιά collection (see picture below).

It is important to me and hubby that our little Miss is able to grow up embracing her Greekness. Growing up in the διασπορά it is hard to be able to continue those customs and traditions that were instilled in us by our parents.  When I was 21 I spent 3 months in Greece after finishing my degree.  I primarily spent the time in Athens but I did spend a week or so in my dad’s village.  My dad’s village finally got asphalt roads that year if it gives you a visual of what it was like.  My aunt and uncle from the US (God rest their souls) were in Greece that summer.  I was walking with one cousin from the aunt and uncle’s house to our house.  We could see sitting about 4 houses down two little old ladies, widows, as they were dressed all in black.  As we were walking closer I heard one say to the other, “έρχεται η αμερικανα”…”oh here comes the American.”  I of course with a big smile on my face respond in my perfectly accented Greek, looking behind me, “που, που είναι η αμερικανικα;…Where oh where is the American?”  The women were in shock, literally jaws dropped.  They continued to say, “παιδί μου μιλάτε ελληνικά;…My child you speak Greek?”  I replied, “φυσικά μιλάω ελληνικά, εχω αποφοιτήσει από το Ελληνικό Σχολείο, kai σπούδασα ελληνική μελέτες στο πανεπιστήμιο….Of course I speak Greek I finished 8 years of Greek School and minored in Modern Greek Studies in university.”  Well needless to say the ladies were shocked.  They could not believe that an “Amerikanaki” like me could speak Greek with no detection of a foreign accent or anything.

One thing my father said many years ago and has stuck with me is he didn’t learn how to speak English so his kids could learn to speak Greek.  Now at the time growing up I didn’t understand what that meant.  Seriously you moved to a foreign land why wouldn’t you give it your all to learn everything you could.  Now don’t get me wrong he had a successful business and is able to hold his own but now that I have a daughter I understand a bit better what that meant.  If we don’t keep the language alive in our homes then it will be lost forever.  I try to speak Greek to Miss K all the time.  Why you might ask? Because I know that the older she gets the more prevalent the English language will be in her life.  Now is my chance to instill in her some of those traditions that were passed on to me, so when she goes to Greece 20 years from now on her own for 3 months the next generation of little old Greek ladies can be as shocked at how my Greek-Canadian/American daughter can speak better Greek than the locals! 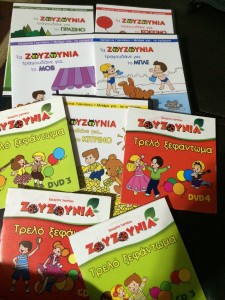