So it took three different tries to get Little Miss in her car seat today. We had two complete meltdowns, like screaming bloody murder meltdowns. The third time was the charm and her daddy and I were able to get her in the seat with only a few tears. Needless to say she was asleep before we left the driveway.

Stop number one was the all important coffee run. We made it to the Starbucks drive-thru where mom had been looking forward to a coffee all day. Unfortunately there were ten cars in front of us and so daddy decided to go inside. There were 15 people in line inside and so mommy didn’t get caffeine today, oh well, c’est la vie.

Stop number two was Walmart. Yes I know it is crazy to go to Walmart any day but a Saturday afternoon, what could I do it had to be done. The drive to Walmart was good as was her first carriage ride. A few cries as we were at the cash register but again she was asleep before we left the store. Other than mommy’s baby brain forgetting one of the things we specifically went out for, the trip was a success.

The drive home was uneventful as was the transition into the house. It is amazing how things have changed. Now we leave with a car seat and at least one bag if not two. Today the carriage had to be put in the car as well. Oh and mommy went out with her hair up in a clip, no makeup on and at least two spit up stains on the second shirt of the day. Having gotten very little sleep last night I was hoping someone would say something. I know for me things aren’t what they used to be but I wouldn’t have it any other way. 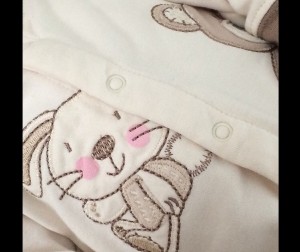