So as many of you know we have been baby led weaning for months now.  For those of you who are newly subscribed to the blog, baby led weaning is a form of feeding.  It basically means letting your child feed themselves.  So instead of going from formula only to the puree stage it cuts out that stage completely.  We didn’t cut out that stage completely because let’s be honest.  When you’re out and about it is a lot easier to open a jar or a pouch of food than it is to have cooked everything and brought it with you.  Now the older that she gets the less pouches we use but at times like this week, when she’s teething badly, it sometimes is her go to.  Okay so back to baby led weaning, you’re probably asking yourself let a baby feed themselves, are you nuts?! Well at first I thought everyone was who talked about it.  How would they know how much to eat?  What if they choked?  I started out by watching videos and cringed at the babies gagging on the foot but realized it was par for the course.  The baby’s gag reflex is truly a wondrous thing.

We started the process with sweet potato fries.  Think sweet potato cut up the size of a steak fry and baked.  We knew she liked them in the mush form now would she know what to do with them in this form.  We showed her how to pick the fry up and low and behold she began to gum it.  At this time she didn’t have teeth yet.  My next food was broccoli.  I basically steamed it and cut up some larger pieces with the stem and put it on her tray.  Remember in baby led weaning the pieces need to be a bit bigger so they have something to hold on to.  She went to town on the broccoli.  Then we gave her a rib.  Now you might think I’m crazy, as my mother did who I had on FaceTime while we did this, but she licked around the rib and did her best.  Since then I have been in search of recipes for food to make.  I like recipes that include veggies wherever possible and are something the whole family can eat.  I have a go to broccoli muffin recipe, a cheese scone recipe and today we have a go to cauliflower recipe.  Cauliflower bites.  Totally easy to make and loved by all.

If you know me I usually never have all of the ingredients that a recipe calls for but I also still make it anyways.  This recipe is adapted from recipe posted on the Little Grazers website.   I did everything as the recipe said except the following:  I didn’t have Parmesan so I used Romano, I didn’t have plain cheddar so I used marble cheddar, I couldn’t find the nutmeg so I didn’t use it.  The kid loved them, even though it hurt her to eat them (teething stinks), when I fed one to her for lunch she almost had a whole one and then had another half for dinner.  I actually just finished making a second batch so that I could freeze.  The comments say that they freeze well but we shall see.  I’ve included some pictures below of the process. Kαλή όρεξη! 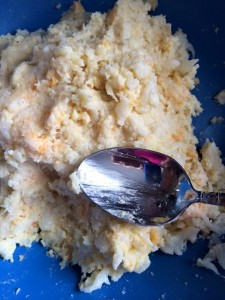 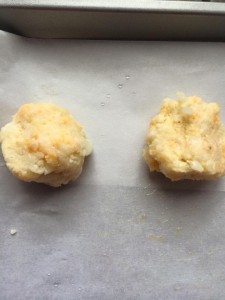 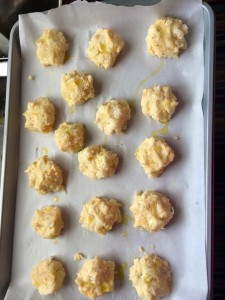 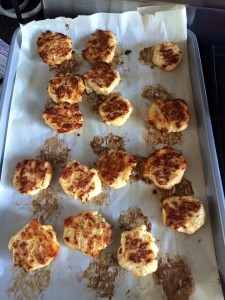